The domestic sugar pipeline, pegged at almost 1.5 million tonnes (mt), has dried up even as the coronavirus disease (Covid-19)-induced lockdown continues to exert pressure on both demand and supply.

The closure of restaurants, malls, and cinema halls has hit the offtake of sweetened products like ice cream, beverages, juices, confectionery, and sweets.

Besides, sugar exports have been affected because of the slump in global prices, although the recent depreciation of the rupee has provided some relief to exporters, according to the Indian Sugar Mill Association (ISMA). Mills are now pinning hopes on prospective shipments to Indonesia to make up for the accumulating losses.

Vasudev Bannerjee of Simbhaoli Sugars said, “Domestic demand is down by more than 30 per cent and there are hurdles in export markets, too. The industry could expect to gain some relief only after the lockdown is lifted and the supply chain comes back on track,” he added.

Indonesia is offering preferential lower import duty for sugar to countries like India, Thailand, and Australia. Generally, Indonesia imports 80-85 per cent of sugar from Thailand, which has witnessed a massive drop in production by 6.5 mt in the current season, compared with the previous year, and this is expected to drop further by 1 mt next year. 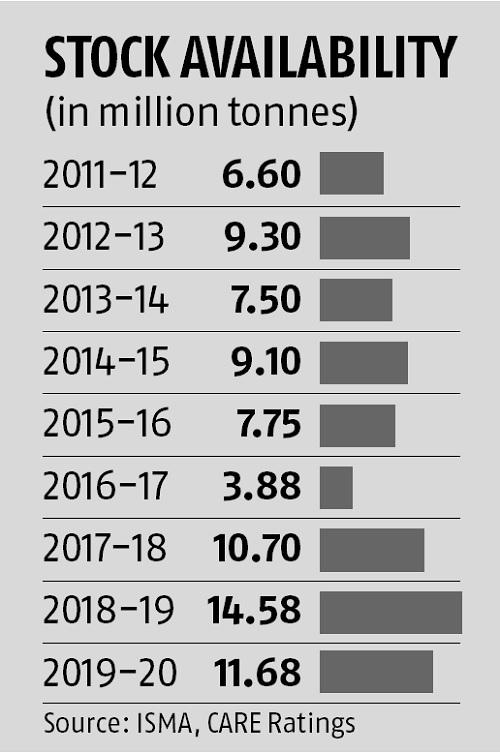 “A major portion of the unmet import demand of Indonesia will come to India, which can see a spurt from June onwards,” ISMA noted, adding that exports had started a past few weeks ago. It said the fall in exports to other countries during lockdown would be partially or largely compensated by Indonesia.

With reallocations being made by the Union food ministry to the maximum admissible export quantity (MAEQ) quota from mills that are not exporting to those that are willing to export more, net exports from India are projected to rise.

Since, the sugar pipeline is dry, there could be a surge in domestic demand when lockdown is lifted, especially from the bulk consumers when their operations resume.

Meanwhile, mills have resolved the issue of ethanol offtake with the intervention of the oil marketing companies (OMCs), which reallocated ethanol supply to deficient depots in other states — including Jharkhand, West Bengal, Madhya Pradesh, Chhattisgarh, Rajasthan, Gujarat, Andhra Pradesh, Telangana and Kerala.