Coronavirus outbreak: Why cities may not remain the same after lockdown

Sontosh Das, 24, lost his job driving for a family of doctors in New Delhi and fled to his village in West Bengal some 1,400 kilometres away, just before the lockdown took effect on March 24. Now home in eastern India, he said he’d rather try his luck with the government’s rural job-guarantee programme than risk being left with nothing once again.

“After Modi ji’s lockdown, we’re scared of returning,” Das said over a crackling phone line. “During tough times, only family comes to help.”

Tens of thousands of workers who returned to villages are now similarly weighing whether to return at the end of the lockdown, which Modi this week extended to May 3. Companies are already reporting labor shortages at ports and factories, potentially exacerbating an economic slowdown.

Real estate developers, an industry that includes investors Blackstone Group and Brookfield Asset Management, predicted more incomplete apartments and office buildings that could ripple through the financial sector in the coming year as a surge in defaults. Companies such as Jindal Steel. are facing a shortage of crane operators at ports.

The labor shortages could persist for six months before broader unemployment becomes a bigger concern, said Sujan Hajra, chief economist, Anand Rathi Financial Services. About 20 per cent of India’s workforce comprises migrants journeying from another state, while a larger share is made up of people who travel from different parts of the state where their workplace is located, he added.

Modi has apologised for the hardship caused by the sudden lockdown — announced on March 24 — which denied as many as 100 million workers the chance to collect their pay. Yet, for the hundreds of thousands of labourers who began trudging back to their villages after being rendered unemployed and homeless, anger against Modi will depend on how long the pain lingers.

The government is aware the country will need to address labour shortages to restart the economy, Nitin Gadkari, minister of roads and small and medium scale enterprises, said in an interview. 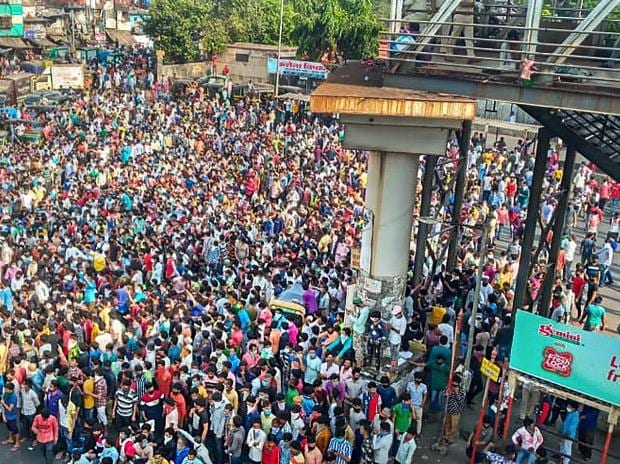 Migrant workers gather outside Bandra West Railway Station as they defy lockdown norms and request to leave for their native places after Prime Minister Narendra Modi had announced the extension of nationwide lockdown till May 3. Photo: PTI

India will allow makers of information technology hardware, farmers and industries in rural areas to resume operations after April 20, the Ministry of Home Affairs said in a statement on Wednesday. It will also lift restrictions to allow e-commerce companies, goods movement by roads, as well as restart port and air cargo operations.

India’s internal migration flow changes with the seasons, with millions of workers heading to cities for most months of the year to build cars, load ships, or clean houses, before going home in time for the village harvest. Bihar, a state due to hold elections this year and home to India’s second-highest migrant labor population, will be worst hit due to the reverse migration, economist and workers’ rights activist Jean Dreze wrote in the Outlook magazine.

Goldman forecasts India’s gross domestic product will grow 1.6 per cent in the year that started April 1, the slowest pace since 1992, around the time when a balance of payments crisis brought down the sitting government and led to the creation of a new administration focused on economic reform rather than political in-fighting. While India’s economic fundamentals are far stronger today than two decades ago, the nation’s poorest citizens have been directly hit for the second time since 2016, when Modi abruptly invalidated almost all bank notes in a similar late night edict aimed at combating corruption.

Yet, unlike during demonetisation when workers felt the rich man suffered more, the virus lockdown hurts mostly the poor, said Chinmay Tumbe, economist with the Indian Institute of Management.

Any meaningful stimulus would need a minimum Rs 6 trillion ($79 billion) compared with the Rs 600 billion cash Modi’s government pledges to transfer to the poor, estimates Palaniappan Chidambaram, a leader of the opposition Congress party and India’s former finance minister who presided over the country’s response to the global financial crisis of 2008/09. A “deep and prolonged recession” awaits sectors such as agriculture that are dependent on migration, Chidambaram said by email.

Migrant workers on Tuesday swarmed out of a camp created for them in Mumbai, demanding to go home after a rumor went around that India is resuming railway services. More than 600,000 are currently housed in the city, according to local leaders, who blame Modi’s federal government for not allowing them a passage back to their states.

ALSO READ: UP to Kerala: States try to bring businesses back to life in lockdown

Before Das was allowed into his village in Uttar Dinajpur, West Bengal, the headman and a doctor checked on him. Then neighbours cloistered his family within their house until convinced they were healthy. The ancestral rice farm is too small to sustain Das, his parents and two brothers, so Das’s father runs a stall selling paan — a chewy combination of betel leaf, areca nut and tobacco — to supplement income. In New Delhi, Das would earn $240 a month, a decent wage in a nation where more than 80 per cent of workers earn less than half.

“My mother insists we should stay back home, she says we don’t need so much money to live on,” Das said. “No one knows how long this madness will last but we know that nothing will remain the same.”