Stocks of agriculture-related firms — such as fertiliser, chemicals, seeds, and equipment makers — were in focus on Wednesday, after the government provided relaxation to farming and rural activities after April 20.

The measures bode well for these companies and put to rest concerns related to the impact of lockdown on crop harvesting and procurement activities. On Wednesday, the India Meteorological Department gave a forecast of normal monsoon, adding to the relief.

Consequently, most of these stocks ended the day with gains of up to 7.8 per cent.

Over the past few days, investors had remained nervous due to the lockdown, and its inevitable impact on crop harvesting and procurement, despite a strong rabi season.

Credit Suisse, too, observed that despite anecdotal evidence of a bumper harvest, market arrivals have dropped 50-95 per cent year-on-year (YoY). 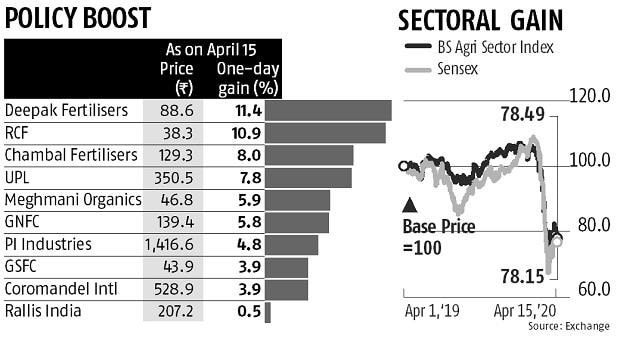 Hence, the government’s new guidelines eases these concerns. CARE Ratings, too, says that agriculture and manufacturing of essential goods will benefit the most.

For agrochemical players, restoration of supplies from China bodes well, with the kharif season sowing still sometime away. Further, channel inventories will ensure supplies don’t get hampered by any disruption, say analysts.

The analysts also said that while there was no clear directive earlier for seeds, it was now included in the new guidelines. Shares of Kaveri Seed Company rose 4.2 per cent on Wednesday.

This is a positive for Rallis too, which derives a good portion of its income from seed sales during the June quarter. With harvesting and procurement of the rabi crop to pick up pace, it means farmer incomes will be steady and this, coupled with normal monsoon, should boost demand for seeds, agrochemicals, and fertilisers for the kharif season.

Fertiliser players are also expected to benefit from lower input prices. PhillipCapital’s channel checks suggest that prices of DAP (a major grade) declined by 17 per cent YoY (2 per cent sequentially) in Q4, and a similar trend was seen for other complex grades.

However, a sharper fall in prices of raw materials like phosphoric acid (21 per cent YoY) and ammonia (12 per cent YoY) will support margins of P&K (phosphate and potassium) players, especially Coromandel International.

For Dhanuka Agritech and Rallis, too, Emkay Global expects improvement in margins to be led by cost rationalisation and operating leverage. On the other hand, analysts remain cautious on export-oriented players.

Covid-led supply disruptions in Europe and the US may impact supplies. Europe and the US have already seen a few soft quarters, and Covid-19 has piled on the pressure. Thus, analysts remain cautious on PI Industries, UPL, and Sharda Cropchem; UPL is better placed among the three as it derives more than a third of its revenues and growth from Latin America (LatAm).

Escorts was the only gainer in the auto sector, ending the day up 3.7 per cent. While other auto companies also have an exposure (Maruti, M&M, and Hero MotoCorp) to the rural space, there was no mention of resumption of services for auto dealerships.

Further, auto stocks had already rallied by 15-30 per cent since April 3, while the benchmarks were up 11 per cent. With sales expected to remain soft in the June quarter and discretionary large-ticket items likely to get postponed, concerns on volumes will remain.