Ten days back, Jeet Shah, owner of a south Mumbai-based quick service restaurant Dailycacy that is registered on Swiggy, got a call from the platform’s representative. The food tech platform had recently ventured into grocery delivery and the call was to find out if Shah knew any grocer who would be willing to sell grocery through Swiggy. Dailycacy, which was doing brisk business till a few months ago, had seen its daily orders drop 80 per cent due to the lockdown.

Sensing an opportunity, Shah offered to double up as a grocer, as he had the space to stock and sell, manpower and other wherewithal. There has been no looking back for him since then. Starting with three products, Dailycacy has expanded to more than 100 products in the past one week and it now sells everything — from grocery and vegetables to cheese and butter. In a short span, his restaurant has become the top seller in value and volume terms on Swiggy.

“We have sold goods weighing 15 tonnes in the past 5 days,” said an exuberant Shah. Though the margins are thin and leaves him with only 2 per cent after paying off 8 per cent as commission to the food tech platform, it’s an additional revenue stream and has boosted the morale of the staff amid a lull phase of the main business.

Encouraged by the response, Swiggy is reaching out to other restaurant partners and gauging their interest in doubling up as grocers. Swiggy did not respond to an email seeking for a response for this story.

Its rival Zomato, which, too, has upped its focus on grocery delivery as the lockdown continues, is also in talks with its restaurant partners.

A spokesperson for Zomato said a few of its restaurant partners did reach out to list themselves for Zomato Market, as they look to restructure their businesses. “We follow the marketplace model and are happy to list any restaurant with an adequate supply of essential products separately for grocery delivery,” the spokesperson said.

Given that people have been reluctant to order cooked food — which worsened due to a couple of cases of delivery personnel testing positive for Covid-19 — food delivery platforms have included grocery delivery as part of their services.

Zomato has a tab called ‘market’, which lists nearby mom-and-pop stores, bakeries, and others who are willing to stock and delivery grocery and daily food items.

Swiggy has a similar model of listing grocery stores and retailers as sellers of grocery under the ‘groceries’ tab on the app. It also revamped its ‘Swiggy Go’ in a Dunzo-like model, by launching a hyperlocal delivery service called ‘Genie’. This services picks up and drops of essential items and medicines from anywhere within the city.

The move to engage with restaurant partners for grocery delivery has been prompted by the reluctance on part of some traditional kirana stores to join hands. “I don’t see any merit in it,” said the owner of a Mumbai-based large grocery store. “After paying them a commission, I will only be left with 2 per cent. Why get into it?”

Given the onset of the pandemic, the demand of hyperlocal grocery several consumer internet and gig economy-based businesses have pivoted during the lockdown, which has led to interesting partnerships (see table).

According to research by consulting firm RedSeer last year, online food and grocery retail was expected to touch $10.5 billion by 2023, driven by an increased assortment of products and efforts like express delivery operations. 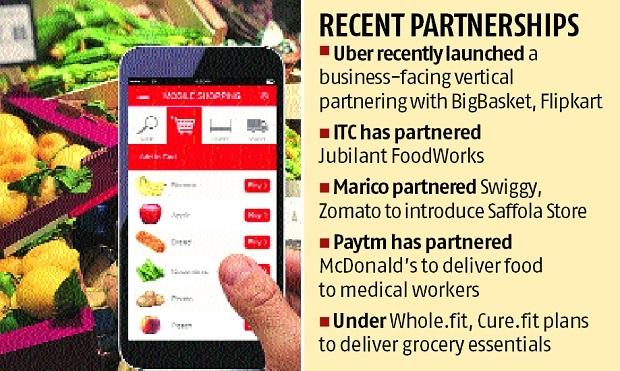