The International Monetary Fund (IMF) on Wednesday urged India to keep its fiscal deficit concerns aside and spend to tackle the Covid-19 impact. This will serve to arrest the economic slowdown, even though the fiscal space of the country remains limited, according to the IMF.

“In India, the fiscal stance should be eased as needed, to accommodate necessary increases in public health expenditure in response to the pandemic, and to shield against a more severe economic downturn using targeted and temporary measures,” said IMF’s Fiscal Monitor report.

Once the current economic situation improves, a more ambitious and credible medium-term fiscal consolidation path will be needed to bring debt and interest expenditure down, it added. “Transparency must improve and the practice of shifting spending off-Budget must be curtailed,” the IMF cautioned.

According to the IMF, general government debt of India (Centre and states combined) could rise to 74.3 per cent of the gross domestic product (GDP) in CY20, from 71.9 per cent in CY19.

The relatively high general government debt has been a matter of concern for the IMF in the past, whereas the government’s own target was to keep debt contained at 60 per cent of the GDP. With the on-going slowdown, this target will be delayed further.

While the government’s ability to infuse a stimulus package is restricted because of the high debt, the spending is still a necessity.

“India is not a country with ample fiscal space but a health emergency takes precedence and the fiscal support needed is quite substantial though temporary,” Vitor Gaspar, director (fiscal affairs department), told Business Standard.

“The fiscal emergency package put in place on March 26 was timely and targeted. The way it was done was quite adapted to Indian circumstances. Because there was an extension to the coverage of insurance targeting workers in the health system, there has been substantial action in terms of in-kind transfers, which, in India, has been concentrated on food and cooking gas. And there have been cash transfers, some very targeted at poor households,” said Gaspar. India has extended the emergency lifelines during a period of shutdown to make sure people can face the emergency while their basic needs are satisfied, he said. 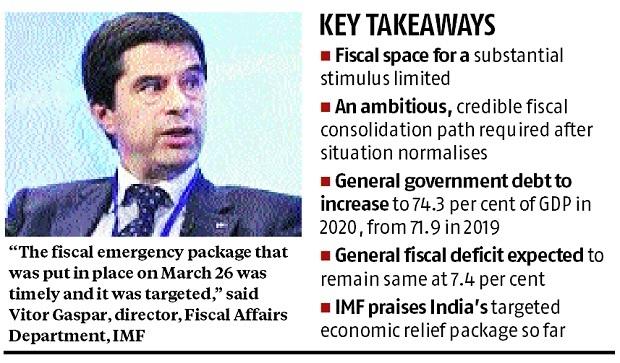 Globally, as output drops, revenue will fall even more sharply. The IMF projected global revenue to be 2.5 per cent of the global GDP, lower than what was projected in the previous Fiscal Monitor in October 2019.

Fiscal balances in 2020 will deteriorate for most countries, with sizable estimated expansions in the US, China, and several European and Asian economies. Although a sizable increase in deficits this year is necessary for many countries, the starting position in some cases presents vulnerabilities, it said.

“The situation is more concerning for emerging market and developing economies that face multiple shocks including the pandemic, an abrupt worsening in financing conditions, weak external demand, and (for commodity exporters) lower commodity prices,” the report said.

Nevertheless, “the extent of impact due to Covid-19 on public finances is highly uncertain and will depend not only on the duration of the pandemic but also on whether the economic recovery is swift,” the report said.

← Prev: Wholesale inflation dips to 4-month low of 1% on sharp fall in food prices Next: What migrant labourers say in lockdown: work can wait, family cannot →