In the 1920s, the psychiatrist Carl Jung built a two-storeyed retreat near the banks of Lake Zurich. Returning from India several years later, where he had been impressed by meditation rooms he saw, he added a private office that no one was allowed to enter. His mornings were spent writing in that space and his afternoons in meditation or in walks in the countryside. In Deep Work, a call to arms to block the distractions of email and social media in order to do thoughtful, original work, Cal Newport begins his book with this description of Jung’s aerie being critical to his productivity and well-being. When he was CEO of Microsoft, Newport reminds us, Bill Gates would occasionally take a break from the office and family for so-called “Think Weeks”.

In a sense, more than a month of social distancing and working from home for those fortunate enough to be able to do so gives us an opportunity to recreate rough facsimiles of the conditions Jung tried to create — and to work and entertain ourselves in ways that mark a sharp break from the past. The pandemic and the lockdowns around the world are a terrible tragedy and will lead to a recession in India and abroad. More than 146,000 have lost their lives worldwide. Millions are out of work. Without adequate safety nets, our migrant workers are among the worst off. Among my pile of newspapers is one with a photograph of a 30-something man carrying his son on his shoulders among a dozen migrants walking along a highway. He wears a smart yellow and blue and white checked shirt and jeans and a belt. He could be one of us — but for his penetrating eyes, which see through all the falsehoods of our unashamedly unequal republic.

ALSO READ: How a bunch of outfits are still getting organic produce to your doorstep

To paraphrase the Financial Times columnist Lucy Kellaway, against such a backdrop of misery, is it acceptable to try to be happy? Yet, it is important to be optimistic — if we are lucky enough to have a choice— rather than perpetually anxious about such dubious concerns as disinfecting groceries and vegetables. 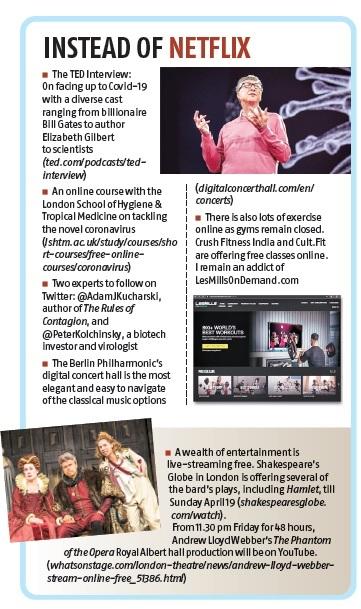 Indeed, Covid-19 and its aftermath are an opportunity to significantly reorient the way we approach work and leisure — and, by extension, life itself. As the philosopher Seneca observed in his essay, “On the Shortness of Life”, “I cannot doubt the truth of that oracular remark …’It is a small part of life we really live.’ Indeed, all the rest is not life but merely time.” As our world slows down, I have had conversations with friends that have a quality quite different from those before the Age of Covid and remind me of the languid story-telling of the 1980s’ Kolkata of my late teens. Last week, a friend, who is a novelist, told me of his wife giving birth late last year before her doctor had arrived at the hospital in such horrifying and hilarious detail that I felt as if I were with them, almost to the doors of the delivery room. I recently called a friend’s 83-year-old mother, who had been an important influence on my reading when I was in college in Delhi. She had just completed the third of Hilary Mantel’s Thomas Cromwell-Henry VIII trilogy. By coincidence, I have spent part of the lockdown relishing every sentence of the second volume, Bring Up the Bodies.

Friends are writing long, newsy emails again, much like the letters one wrote decades ago. A friend’s travel business that focused exclusively on Italy has been destroyed over a matter of weeks by the pandemic. Yet, this week she wrote me a note, not of her troubles but full of gratitude among other things for a dinner at a noisy restaurant we had been to together 15 years ago with the legendary travel writer Jan Morris, now 93. She couldn’t help adding news of her husband, “(He) has a thick black beard and is channelling Che Guevara. NOT GOOD.”

Freed from the staccato, telegram-like communication that characterised email pre-Covid, I have found myself emailing ex-bosses and ex-colleagues after a decade of inexcusably not being in touch. One taught me more 25 years ago than I learned in journalism school about the discipline that a short preparatory outline imposes on articles — and the tendency to meander without one. Writing to a boss from the early 2000s, who many of us worshipped because her irreverent wit and sense of fun lit up the office, I remind her of a juvenile gift I gave her years ago. It was a pink pen with a ridiculous faux flamingo feather, sent in by some more than usually dopey public relations firm, which she sportingly took to a weekly newspaper management meeting for months afterward. “How could I ever forget that pen?!” she instantly replied, as if it was from Tiffany.

Laurie Santos, the Yale University psychology professor whose popular course on happiness is available free on Coursera, argues that routinely counting our blessings and expressing gratitude is an important foundation for well-being. Good humour helps. In the past month, I have found myself forwarding an extract from Morris’ recently published book, Thinking Again, which is so jauntily cheerful that no one could read it and remain downcast.

The Daily Telegraph’s headline summed up her world-view: “Let’s say ‘Go to hell to the whole caboodle’: Her partner has dementia, the country’s a mess, the milk has gone sour yet Jan Morris finds reasons to be cheerful.” The generation gap with her computer gets her down, but only momentarily: “Who is the Server who declines to serve me on my screen this morning?”

I have not owned a television for more than a decade, which leaves me, amid these unsociable Covid evenings, mostly addicted to the Technicolored, high-intensity workouts of the Kiwi company Les Mills that are available online, in books and on Twitter. On Twitter, I have fallen down the Alice in Wonderland rabbit-hole of following virologists and scientific experts. I had a late dinner this week because I had worked my way through a thread by @PeterKolchinsky that ran more than 2,000 words in which he likened antibodies to police dogs and the surface protein on our cells that SARS-CoV-2 uses to get into our cells as “door handles”. After becoming similarly entranced by the Twitter feed of a London School of Hygiene & Tropical Medicine professor @AdamJKucharski, I signed up for a free online course on Covid-19 offered by the school. I am two weeks behind on coursework but the world will likely be grappling with this well into 2021 so I have time. I have also spent an hour a week via Zoom in conversation with the worldly 10th and 12th grade students of Neev Academy, an International Baccalaureate school in Bengaluru, discussing the media and Covid-19.

Inevitably perhaps, my Netflix viewing has declined, in large part because there is so much else that has been put on free to view. In the past week, the Berlin Philharmonic aired two Easter concerts. They were introduced by orchestra members who stood more than the requisite six feet apart and lamented not being able to play together. In an unforgettable video clip of the great Italian conductor Claudio Abbado’s first rehearsal with the orchestra, there is a moment of delicious confusion when the musicians in the horn section jump up to play their part in the third movement of Mahler’s First Symphony. A bemused Abbado stops conducting. Then, apparently worried he might have offended his musicians, he gently says that, for the horn players to stand was the practice during Mahler’s time but in today’s world it is perhaps a bit too much. The clip from 1989 is a timeless example of good management. Memorable in a different way was the release of a 2012 production of Jesus Christ Superstar, set against anti-capitalism protests with Christ as a punk rock star.

An endless succession of days when we are not even allowed to walk a few feet apart in a park to enjoy the impossibly blue skies perhaps makes us more receptive to such moments, on screen and off. It is akin to what is called “altitude weeping”, the tendency to tear up more easily while watching a film on a plane. Even doing housework has its moments. Washing dishes the other day — and never has the sink filled up quite so quickly — I found myself laughing out loud and then in tears listening to a TED talk by the great American biographer, Doris Kearns Goodwin. She was describing with such enjoyment working with Lyndon Johnson, first as a White House intern and then on his biography, and of her respect for Abraham Lincoln, that it was hard not to feel nostalgic and grateful for an age when prime ministers and presidents were extraordinary men and women, not made-for-TV politicians.

Vacuuming and dusting also yields treasures when not outsourced to a much more efficient part-time cleaner. I chanced upon a poem of Vikram Seth’s written in my late mother’s elegant handwriting. The first few lines read: “How rarely all these few years, as work keeps us aloof, Or fares, or one thing or another, Have we had days to spend under our parents’ roof.” (After my father died a decade ago, I discovered he had a photocopy of the poem folded into his wallet.) Circa 2020, the verses are a reminder that the travel so many of us took for granted is unnervingly uncertain for the foreseeable future. My Google calendar alerted me to the fact that my eldest brother and sister-in-law were to arrive on an annual visit to Bengaluru on April 15. Instead, he is locked down in California and she, having come early to Nagpur where her eldest sister lives, was unable to get to Mumbai in time to catch a special flight home early this week. These days, such dislocation seems routine.

Yet, at a time of misery borne disproportionately by India’s poor and by medical staff who lack protective equipment, adding this as a postscript amounts to the opposite of empathy. Hundreds of thousands of India’s workers are still stranded; millions will go to sleep with less food than before, including that migrant with his son on his shoulders and eyes staring out of a photograph in this paper in an indictment of us all. “This disease is not a great leveller. Those working on the frontline — bus-drivers and (supermarket) shelf stackers, nurses and care-workers, shopkeepers and hospital staff — are more likely to catch the disease because they are more exposed. Those in manual jobs will be unable to work from home,” said the BBC Newsnight anchor Emily Maitlis earlier this month as she called for a “social settlement… to be put in place to stop inequality becoming even more stark”. As the past few weeks have demonstrated, in no country is the need for such a settlement as urgent as in India.