In a major change to its foreign direct investment (FDI) policy, India on Saturday mandated that all the investments from neighbouring countries, including China, would now require government approval. This effectively closes the “automatic route” for these nations through which an increasing number of foreign firms and individuals had begun to invest of late.

The sudden move has been attributed to the rising possibility of “opportunistic takeovers” of Indian companies by those in neighbouring nations, as the ongoing Covid-19 pandemic wreaks havoc on the domestic economy.

Until now, Chinese investments were automatically allowed, similar to those from other nations, in all but 16 sectors, such as telecom, defence, and national security.

According to Press Note 3 issued by the Department for Promotion of Industry and Internal Trade (DPIIT) on Saturday, an entity of a country that shares a land border with India can invest only after receiving government approval.

“A non-resident entity can invest in India, subject to the FDI policy, except in those sectors/activities which are prohibited. However, an entity of a country, which shares a land border with India or where the beneficial owner of investment into India is situated in or is a citizen of any such country, can invest only under the government route,” the note stated.

Besides China, the new rule will impact residents of Nepal, Myanmar, Bhutan, Afghanistan, Pakistan, and Bangladesh. So far, similar conditions were in place for the residents and entities from the latter two countries.

The new rules will also apply to all the existing and planned investments by foreign firms in Indian businesses, the DPIIT said. Several Indian start-ups have existing investment from Chinese investors. For instance, Flipkart has an investment from Tencent (about 5 per cent) and Alibaba owns a significant stake in Paytm.

“A fresh infusion of funds into these or Chinese firms wanting to exit their existing investments will now have to require the government’s approval. This step seems to be aimed at having a hostile takeover control measure against China, given that it is investing in and acquiring companies all over the world,” said Atul Pandey, partner at law firm Khaitan & Co. 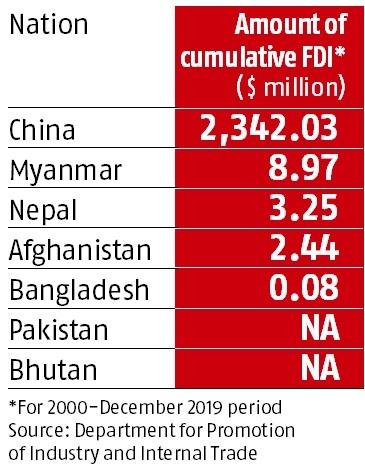 The pitch for curbing Chinese investments in India picked up pace recently after the People’s Bank of China (PBoC) increased its shareholding in Housing Development Finance Corporation (HDFC) amid a sharp correction in the stock of India’s largest mortgage lender.

“There are differences between the public markets and the start-up industry. This move is better suited for Chinese FDI in large publicly-traded firms,” said Sid Pai, founder and managing partner, Siana Capital.

Sources say that over the past week, small businesses had brought up the issue with the Prime Minister’s Office. Former Congress President Rahul Gandhi, too, had flagged the issue.

Most experts lauded the move. “Such a restriction is warranted at least during the time India Inc recovers and stands on its feet again. This shield would also apply to companies in the consumer retail and automotive sectors where FDI was otherwise under the automatic route,” said Anil Talreja, partner and leader, Consumer Business, Deloitte India.

ALSO READ: Covid-19 crisis: Each bank to decide on granting moratorium to NBFCs

With the current crisis impacting businesses, which are highly leveraged, takeover opportunities will open in many sectors, and the government needs to track these, echoed Vikram Doshi, partner-Tax & Regulatory, PwC India.

“Chinese tech investors have put an estimated $4 billion of greenfield investments in Indian start-ups, according to the estimates of India-China Economic and Cultural Council. Such is their pace that over the last few years, 18 of India’s 30 unicorns are Chinese-funded. Now, essentially, all the Chinese investments in India will be under the government’s radar and vigilance,” said Sandeep Jhunjhunwala, director, Nangia Andersen.

There is also a general sense among the investor and the larger start-up community that the decision to scrutinise Chinese investments is pandering to popular sentiment and will ease over the long term.

“It is not a bad idea. The government scrutinised Chinese firms investing in India but this did not seem to be a strategic move. If there was an issue or concern about the Chinese takeover of Indian firms, such a rule should have existed even before the coronavirus situation. I would expect some investment decisions to slow down for a few months because of the lack of automatic route… but this looks like perception management,” said Anand Lunia, general partner, IndiaQuotient, an early-stage venture capital fund.

Deep technology and social media-related investments may see an impact for a while, he said. “There is a lot of Chinese money in the country already, investments in Paytm and others for example.

Even large companies like Xiaomi have come in through the FDI route. The Press Note 3 may delay some of these investments by some time,” Lunia added.