The International Monetary Fund (IMF) has cut its projection of India’s economic growth to 1.9 per cent for the current financial year, the lowest since the 1991 balance of payments (BoP) crisis. It had earlier forecast a growth rate of 5.8 per cent.

This revision was done in light of the impact of the coronavirus disease (Covid-19), and the subsequent nationwide lockdown imposed by the central government to check the spread of the virus.

However, the projection is not low comparatively, given the fact that the global economy is projected to contract 3 per cent against a growth of 3.3 per cent expected earlier.

In its World Economic Outlook (WEO), published a day ahead of the start of the spring meetings of the World Bank and the Fund on Tuesday, the multi-lateral agency expected India to recover to 7.4 per cent growth in financial year 2021-22 (FY22).

This is not surprising because the global economy is also projected to grow by 5.8 per cent in 2021. It is based on IMF’s baseline scenario, which assumes that the pandemic fades in the second half of 2020 and containment efforts can be gradually unwound. For FY20, IMF expected India’s economy to grow at a slower pace at 4.2 per cent, rather than the 5 per cent projected by the second advance estimates.

IMF’s projection of 1.9 per cent growth rate for India in the current financial year is 0.4 percentage points higher than the lower range of forecasts by the World Bank, which expected India’s economy to grow in the range of 1.5-2.8 per cent in FY21, depending on when the lockdown is lifted.

The last time India’s expansion was lower was back in FY92 when it fell to 1.1 per cent, and prompted the then PV Narasimha Rao government to unleash economic liberalisation.

Other agencies have been conflicted on India’s future trajectory. While Nomura predicted the economy to contract by 0.5 per cent during 2020, the Asian Development Bank expected it to grow 4 per cent in FY21. 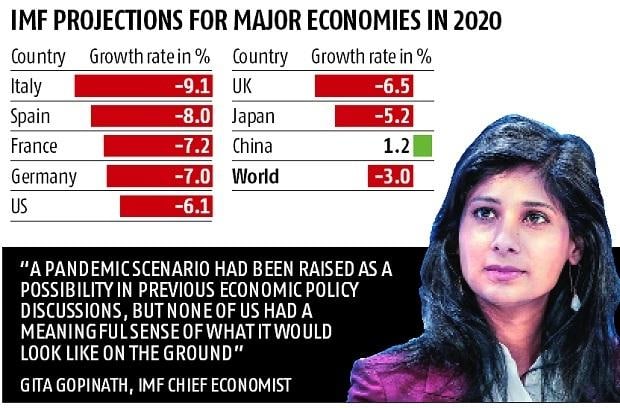 If IMF’s projections come true, India, having lost the tag of the fastest growing large economy to China in FY20, will regain it in the current financial year, only to lose it again in FY21. This is because China is projected to grow at 6.1 per cent in 2019, 1.2 per cent in 2020 and a whopping 9.2 per cent in 2021.

Gopinath said the world had changed dramatically in the three months since the Fund’s last WEO update in January.

“A pandemic scenario had been raised as a possibility in previous economic policy discussions, but none of us had a meaningful sense of what it would look like on the ground and what it would mean for the economy. We now encounter a grim reality, where exponential growth of contagion means 100 infected individuals become 10,000 in a matter of a few days,” she said.

IMF projected emerging Asia — which includes China, India, Indonesia, Malaysia, Philippines, Thailand, and Vietnam — to be the only region with growth in 2020 (1 per cent), albeit over 5 percentage points below the previous decade’s average for the countries.