Wholesale inflation in March reduced to a four-month low of 1 per cent, down from February’s 2.3 per cent, thanks to a reduction in the rate of food inflation, according to the official data released on Thursday.

India’s wholesale inflation had crashed to 0 per cent in October and has been relatively volatile ever since. Economists said the low inflation had come amidst a low response rate, and was contrary to expectations of disinflation.

Deflationary pressure on manufactured product prices continued for the second consecutive month, and pulled down the overall Wholesale Price Index (WPI)-based inflation. In line with this, prices of manufactured products, which have a combined weight of 65 per cent in the index, rose by just 0.3 per cent, after rising by 0.4 per cent in February. These prices had fallen for four consecutive months till December.

Eleven of the 17 components within manufactured products recorded a contraction in March. Experts say the index would continue to see low growth because of the poor health of the manufacturing sector, which had seen prices softening across categories since the beginning of 2019. 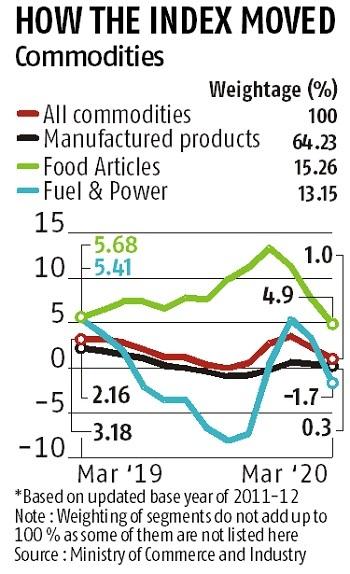 In the food category, existing pressure points appeared to be softening. Overall food inflation reduced to 4.9, down from 7.7 per cent in February. Food inflation has been on a downward path since December, when it hit a high of 13.3 per cent. The reduction in the rate of food price rise is expected to benefit sections of the rural and urban poor, at a time when the country has been under a nationwide lockdown since March 25. There have been reports of low availability of foodgrain in some areas as supply chains for these goods have been disrupted.

Within foods, the price of onions continued to see the highest inflation at 112 per cent. However, the rate of increase has reduced continuously from December, when it was 455 per cent. Meanwhile, the price of potatoes rose by 62 per cent.